Heading west from Vancouver, Vancouver Lake is about a 45 minute trip and the nearby nearby Frenchman’s Bar, 120-acre regional park is located on the Columbia River with a great beach and view of the river.

Headed east from Vancouver, and close to downtown is Fort Vancouver. You go under the interstate bridge (by the Vancouver Red Lion), then over the land bridge. It takes about 15 minutes to bike there from Hayden Island.

Further up the river is Vancouver’s Marine Park, about a 30 minute bike ride along the river. It’s the only City park in Vancouver with public water access and a boat ramp. The 5-mile Waterfront Renaissance Trail ends here.

The Lewis and Clark Discovery Greenway, traveling upriver will eventually take you to Camas and Washougal with treasures such as Lacamas Lake and the Washougal Refuge, about an 1.5 hr bike ride from Hayden Island. 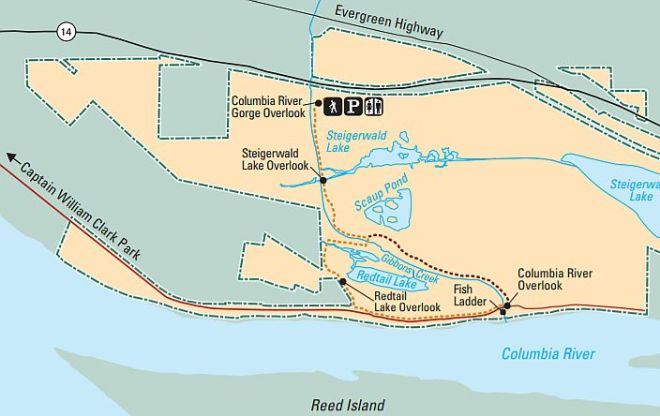 The Dike trail is about three miles one way and follows the Columbia River from Steamboat Landing Park to the border of the Steigerwald Lake National Wildlife Refuge. This trail is open all year round with access to restroom facilities at Captain William Clark Park located along the Dike and no fees to pay for access to the trail.

The 40-Mile Loop Land Trust, is independent of any governmental body and is managed by a volunteer citizen board of directors. It circles all of Portland, and incorporates the Marine Drive trail.