We’re an island…but provide NO beach access. Want a view to the Columbia? Forget it. Private developers have put river views on lock-down. Gated access is the rule.


Tear down this wall. Residents of our island community don’t have to be slaves to developers.


Seattle’s Congregate Shelter for 72 people and the Modular Micro Dwelling Unit project incorporates modular units. The rent “in Portland dollars” will be $450 a month. “There’s no reason Multnomah County or the City of Portland can’t do something like this”, says two-time City Council candidate Stuart Emmons. He should know. He’s building them.

An empty lot across from Kenton Park is being used to launch a one year pilot program to establish a community of all women that would be operated in collaboration between Catholic Charities and the Joint Office of Homeless Services.


Here are some alternative development plans – that could benefit EVERYONE:

The innovative Container City in Las Vegas (images), provides an opportunity for small businesses to thrive. Let people circulate and mix. Bring it down to the river. Everybody wins.

The highly successful temporary Re:Start Mall in Christchurch was built out of shipping containers after the earthquake.

Blockable has an innovative, low-cost housing solution that could impact all sorts of housing. They manufacture container-sized housing modules near the Vancouver shipyards. Relevant Buildings and ModsPDX design and build container homes in Portland.


The units, called “Bloks,” are modular and available in lengths from 18 feet to 38 feet. Like containers, with all the advantages of shipping and infrastructure, except lighter and easier to modify. Permitting done in the factory, not on site. It’s a snap to install.

Customers will also be able to add basic and premium bathrooms and kitchens, as well as other modular additions. The price per square foot is expected to range from $150 to $300. Finished units are estimated to cost between $25,000 and $100,000, depending on size. The price is similar to units built on site, with contractors saving mostly time.

A modular small business park might be located in the burned out remains of the Sundance Marina warehouse (on the East side), on the West side of the I-5 bridge, the Manheim Auto Auction facility (near West Hayden Island), near the Railroad Bridge or in one of the golf courses near the Columbia River. Federal money could make mixed use commercial and housing space more profitable. Instead of congestion pricing, private industry might build a community and the mass transit link.

Relevant Buildings, has developed prototypes of five different home styles to be certified by the state The current goal is to keep the sale price of the home in the $150,000 range. Two 40′ containers make a one bedroom, one bath home with a total of 640 sf.


The Portland House & Outdoor Living Show has container homes on display. Portland Container has all sizes of raw containers for sale.

Carbon12 (above), in the Mississippi District and Williams, is the tallest Cross-Laminated Timber (CLT) building in the United States. Stronger than steel, lighter than concrete and faster to assemble than any other structural system, it can withstand earthquakes better than steel or concrete.

The Seattle Times reports that Compass Housing Alliance plans to construct 13 units that come equipped with their own restrooms. It will be the first in the U.S. built with steel modules.

Seattle based OneBuild is supplying the modules and bought a facility in K-Falls. Compass says the modules will be cheaper than traditional construction and more comfortable for residents, who will have access to on-site support services as well as a communal kitchen and laundry facilities. The community is slated to open in December in Seattle’s Columbia City neighborhood.

The June Key Delta Community Center next to Penninsular Park was the recepient of a $70,000 grant from Pacific Power’s Blue Sky renewable energy program. The 18.36-kilowatt solar energy system, installed by Synchro Solar, has 62 solar panels generating enough energy to power all the facility’s electrical needs. The Portland Bureau of Planning and Sustainability’s Green Investment Fund also provided a grant of more than $119,000 for using boxcar-sized salvaged cargo containers.

This Yacht barge might have the equivalent of 4 tiny homes on the top deck. Kitchen and entertainment downstairs. Some 3500 watts of Solar could charge the 13Kwatt/hr Tesla Powerwall. A prototype might cost $500,000 but once designs are finalized and the manufacturing process streamlined, additional units might cost $250,000 – $400,000, depending on options. Maybe there’s free money available to kickstart a project like this.

The best researched book on the phenomena is Andrew Heben’s Tent City Urbanism which explores the intersection of the “tiny house movement” and homeless tent cities. Heben has since helped co-found SquareOne Villages, a non-profit organization in Eugene that puts many of the ideas in his book into action.

The first 12 homes of Emerald Village in Eugene will each be developed by local architects that are donating their time. Once design and construction documents are done, the teams will solicit material suppliers for donations of building materials, with a $15,000 per house maximum budget. Residents, who help build them, can move in for $200-$300 a month.

Each team will then make an effort to include residents and community volunteers in the construction process. Religious organizations run the 501(c)3. They make what appears to be a good financial and social case.

Transition Projects Inc. plans to construct 70 tiny homes on Portland Development Commission land in Kenton. Organizations and entities including Village Coalition, Catholic Charities, Portland State University and the Joint Office of Homeless Services have been working to win over the neighborhood’s support for the tiny home project after the proposal was initially introduced to the neighborhood with little notice. If the neighborhood approves, the Partners On Dwelling (POD) Initiative will be installed by the end of March, reports the Tribune.

Portland has lots of containers, barges and tiny homes. Tiny Homes on barges puts it all together. It might enable inexpensive housing to be easily built and moved.

Vancouver-based Friends of the Carpenter is a non-profit, faith-based facility with a large warehouse full of wood-working equipment, training and expertise. Other faith-based organizations, commercial marine industries, homeless advocates, and communities up and down the river might also benefit from homeless communities on barges.

A Tiny House Street of Dreams on Hayden Island is slated to open on the Fourth of July (UPDATE: delayed a month or so).

The Tiny Home Street of Dreams will feature some 10 tiny homes at Harborside RV & Marine on Hayden Island. The homes will be built in different colors and designs, some with multiple stories, others furnished to reflect different themes. All the homes were designed by Global Green Concept Designs, an Olympia, Wash.-based business that was founded five years ago and sells prefabricated tiny home kits.

Residents on Hayden Island should be in control of our own fate. Developers should not lock out river access. Oregonian’s pride themselves on beach access. We don’t have it.

There are many different ways to open up the river. A mini-mall could open up the river and provide community gathering places. Mixed use facilities could provide both residential and small business opportunities. New businesses, such as building tiny homes on barges might also be floated. 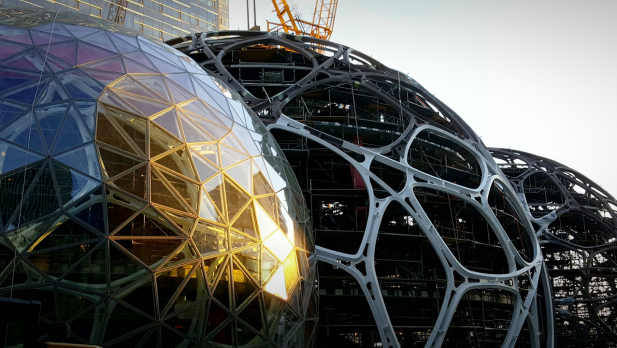 Amazon’s 100 ft tall Biospheres will host more than 300 plant species from around the world. They’re scheduled for completion next year. It includes office space, ground-level retail and public amenities like a public dog park.

Opportunities abound when we open our minds.