For centuries, the Columbia River has been at the center of trade and transportation in the Pacific Northwest.

By the 1850s, steamboats were moving goods along the Columbia and Snake rivers, but goods had to be offloaded and portaged — at Celilo Falls, on the middle Columbia, and at Cascade Rapids, between the middle and lower Columbia — by foot, wagon, and then by the Oregon Portage Railroad at Cascade Locks.

The Alert (W-127), is said to be the oldest operational, engine-driven, ex-United States military combat ship in the world. In the future, museum type tours of the ship are planned with overnight stays for youth and veterans groups. It will conduct on the water activities as a good will ambassador of her home port of Portland, Oregon.

A couple of dozen old salts are breathing new life into a World War II ship by the bridge, the USS LCI 713, an infantry landing craft, and hope to have the ship sailing before long — depending on money and parts. The World War II-era seagoing tug Sakarissa is nearby. Rick Holmes, president of the Amphibious Forces Memorial Museum, the nonprofit that owns the LCI 713, hopes to build a regional maritime heritage center.


Many steamboats operated on the Columbia between 1850-1981 with the Oregon Steamboat Navigation Company buying many of them out. The completion of the 1908 railroad bridge, near I-5, put some out of business.


As railroads were extended along the Columbia in the 1860s and linked to networks throughout the region, steamboat transportation was superseded by a more efficient and economical railway system.

After an 1874 survey, Congress authorized work on the Cascades Canal, which finally opened in 1896. In 1915, The Dalles-Celilo Canal opened and the steamer Undine made the first continuous trip between Lewiston and Portland.

The Northern Pacific built a railroad ferry that connected the Port of Kalama on the Washington side to Goble Oregon, just east of Longview/Rainier.

The Goble train ferry began in 1884 and continued until 1908.The passenger service continued until 1934. The railroad steamer was brought out in 57,159 separate pieces from New York by the Tillie E. Starbuck, the first iron sailing vessel built in the United States, and reassembled in Portland.

Today, Columbia Bar Pilots bring large freighters across the treacherous Columbia River Bar while Columbia River Pilots take over in Astoria and guide ships up and down the Columbia.

There are 45 state-licensed Columbia river pilots. River pilots typically come from tugboats or similar backgrounds. New pilots go through a 2 1/2-year training program. There are close to 100 course changes from the mouth of the river to Port of Portland.


Here is a typical river scene. A full gas/oil barge (identified with the smiley face) is going up river headed for Eastern Oregon. Empty grain barges also go upriver, to get re-filled. The reverse is true coming down river; the gas barge is empty and grain barges are full. The grain barges store their wheat in the large elevators near Hayden Island. The grain is then loaded onto cargo ships headed to the far East.

River pilots navigate ships to all ports upriver from Astoria to Longview, St Helens, Kalama, Portland and Vancouver. The Columbia and Willamette Rivers Pilotage is a 600-foot wide, 85-mile narrow channel. Panamax and Post-Panamax ships do not call here due to the 43 foot draft restriction of the channel.


World Port Source has a history of Ports in Oregon and Ports in Washington.


Container barging on the Columbia and Snake river system forms the second largest river system in the U.S. The system is slated for a 14-week closure beginning in December 2016 for lock maintenance.


The U.S. Army Corps of Engineers and the lower Columbia River ports of Longview, Kalama, Woodland, Vancouver and Portland, along with federal and state agencies, other ports and stakeholders ensure a reliable deep-draft navigation channel.


Public agencies and private companies have invested more than $1 billion in the lower Columbia River since it was deepened five years ago according to a study by the Pacific Northwest Waterways Association. The U.S. Army Corps of Engineers spent $180 million to deepen the 110-mile navigation channel from 40 to 43 feet. The initial dredging was finished in 2010 and has been instrumental in increasing bulk grain and auto imports, according to the port. Roughly 77 percent of the Port of Portland’s current business is related to movement of agricultural and mineral bulks.


The locks for the eight dams between Portland on the Columbia River and Lewiston on the Snake River were taken out of service Dec. 12, 2016 for a 14-week maintenance outage. Maintenance iscludes removing existing navigation locks and installing new redundant control systems.

Forty percent of the nation’s wheat moves on the Snake and Columbia rivers, with goods of all kinds transported annually valued at $3 billion. The most common cargo are agricultural products, petroleum products and steel and other metal items. The US Army Corp districts manage the locks and dams that comprise the 359-mile-long federally authorized inland navigation channel extending upriver from Portland, Oregon, to Lewiston, Idaho.

Vancouver’s Greenberry and Thompson Metal Fab, on the waterfront, do massive structural work.

Other recent marine projects include $228 million expanded rail freight infrastructure at the Port of Vancouver, $100 million that Temco spent to increase grain capacity and $140 million to improve potash exporter Canpotex’s shiploading efficiency at the Port of Portland.

Port of Portland’s Terminal 5, operated by Columbia Grain, is the highest volume wheat export terminal in the U.S.


Vancouver’s United Grain, which runs the big grain elevator in Vancouver, is one of the West Coast’s largest grain exporters. It’s owned by the Mitsui Group of Japan and has a market value of $22.5 billion. United Grain recently bought Pendleton Grain Growers which ran elevators and Columbia River terminal in Eastern Oregon. 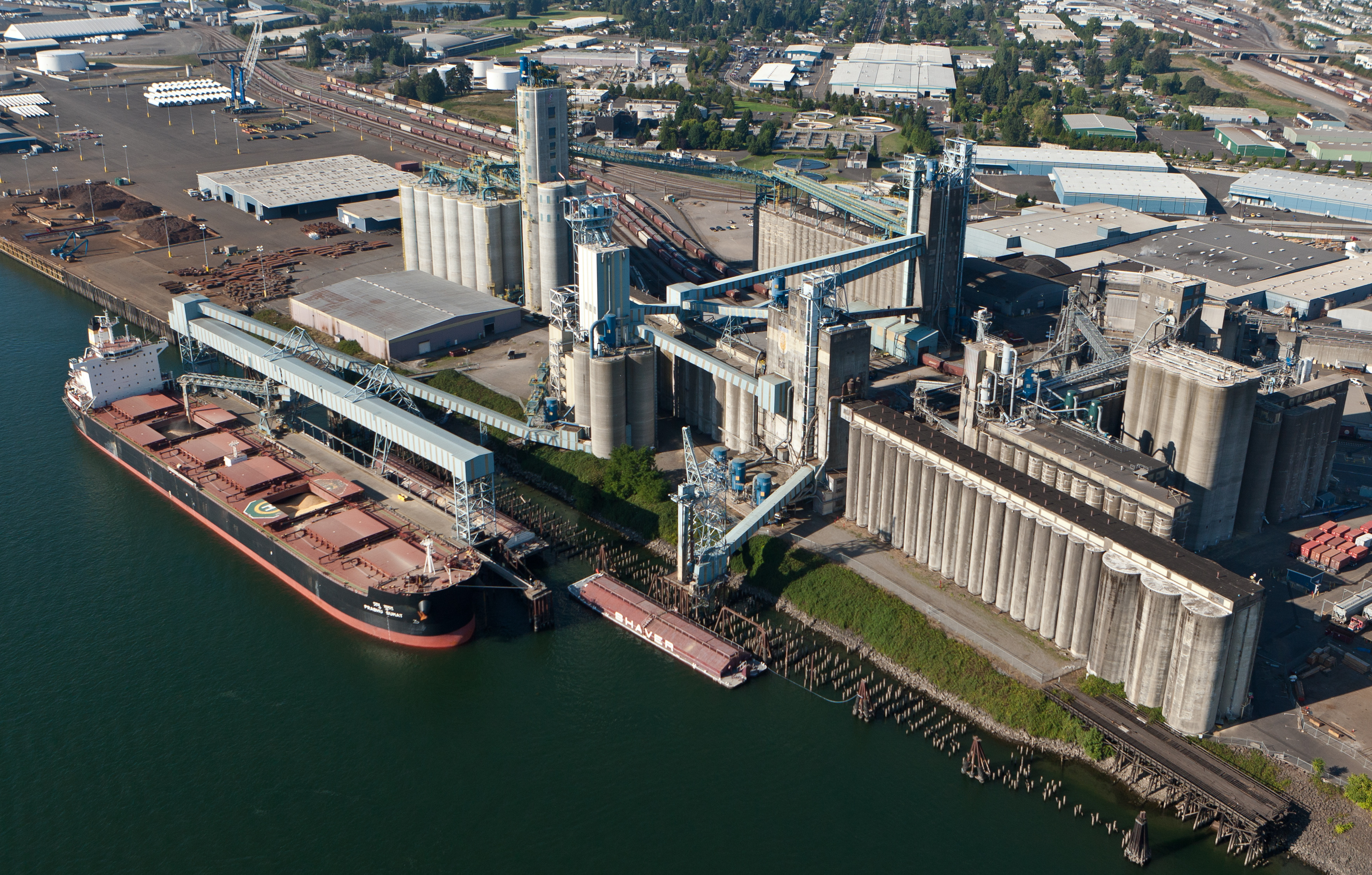 
Here’s a tour of the newest Tidewater tug, the Crown Point. It’s one of three towboats that Tidewater is adding to its fleet of 16 vessels and 160 barges as part of its larger effort to move cargo along the Columbia and Snake rivers. Tidewater selected Portland-based Vigor Industrial to build the three new towboats.

Bob Curcio (in white) is Tidewater’s new president and CEO. Larry Bartel (in green) was one of two Captains who piloted the Crown Point through her sea trials.


Terminal 6, 102 miles upriver from the ocean, never seriously competed with major West Coast container ports, reports the Oregonian. In 2008, Portland accounted for just 1.3 percent of container movement along the coast, according to the Pacific Maritime Association.


In 2010, the Philippines-based International Container Terminal Services, Inc. (ICTSI) assumed control of container operations on a 25-year lease at Terminal 6 from the Port of Portland. But relations between the International Longshore and Warehouse Union (ILWU) and ICTSI deteriorated and came to head with a 2014 labor slowdown that affected the 29 ports comprising the Pacific Maritime Association. The union said the slow labor was the result of unsafe working conditions; the Pacific Maritime Association alleged it was a strike.

In February 2015, Hanjin Shipping, responsible for some 80 percent of the containers coming through Terminal 6, announced that it would discontinue service to Portland. Hapag-Lloyd and Westwood left in April, 2015.


Today, at least 1,500 trucks now travel each week from Portland to Seattle to transport freight, reports the Portland Tribune.

Hanjin Shipping is the Port of Portland’s biggest trans-Pacific container carrier (about 80%), along with Hapag-Lloyd (about 20%) and Westwood Shipping Lines.

Hanjin’s ended direct service to the Port of Portland’s container terminal in February, 2015, with Hapag-Lloyd also stopping service a few weeks later, leaving the region without a direct link to Asian markets, creating a massive void for many businesses in the region.

The metro area probably sees about 2,000 more truck trips a day as a result of the shipping giants pulling out of Terminal 6, Oregon’s only international container port. South Korea-based carrier Hanjin (eliminating 80 percent of business), and German carrier Hapag-Lloyd (nearly all the remaining 20%).

A good portion of that freight is now moving over the Interstate Bridge using trucks, according to Susie Lahsene, the port’s senior manager of planning and policy. Master of the domain is port director Bill Wyatt.


Unionized grain handlers are going back to work at Northwest grain terminals including United Grain in Vancouver, Columbia Grain, at Portland’s terminal 5, Louis Dreyfus Commodities north of the Steel Bridge (by the Moda Center and Light Rail), and Temco, just north of the Broadway Bridge.


Container ships are used for the carriage of miscellaneous goods. Capacity is measured in twenty-foot equivalent units (TEU). A bulker transports unpackaged bulk cargo, such as grains, coal, ore and cement. A tanker transports liquids in bulk. A gas tanker transports LPG, LNG or liquefied chemical gases in bulk. Roll-on/roll-off ships carry wheeled cargo, such as automobiles, trucks and railroad cars. The IBC Code provides an international standard for the safe carriage by sea of dangerous and noxious liquid chemicals in bulk.

Diversified Marine, on the slough near the Expo Center, repairs, retrofits and constructs tugs and barges.

Most of the boat ramps on Hayden Island are private. Multnomah County Marine Patrol and Clark Co Marine Patrol have jurisdiction along the County line in coordination with other agencies.

Hayden Island is a boater’s paradise. It’s on the Columbia, near the Willamette, and convenient to I-5. Many Portlanders moor their boats here. It’s not so hot for launching boats, however. The closest public launch is at the Gleason Boat Ramp, 4325 NE Marine Drive. Boat charters and lessons available on or near Hayden Island include Alder Creek, Island Sailing, Passion Yachts, Rivercity Sailing and SK Watercraft. Oregon Yacht brokers match clients and boats.


The Sailing in Portland Meetup Group promotes sailing opportunities, sailing education, practice and enhancement of sailing skills, sharing of information, and socializing among sailors and aspiring sailors in the Portland, Oregon, area and beyond.

A conflict has been simmering between people who are living on boats anchored in the Portland area, and others who live on or near the waterway. Think Out Loud explores this debate.

The U.S. Coast Guard shows the simulated rescue of a kayaker (above) in Dead Man’s Cove on the Columbia River, a popular tourist attraction at Cape Disappointment. The CG station there has 5 search and rescue boats, including: the 52 foot- motor lifeboat “Triumph II”, two 47 foot motor lifeboats, and two 29 foot second generation Defender class response boats. The 52′ and 47′ are designed for operations in heavy surf and are capable of being rolled over by breaking swells and re-right themselves.

Each river pilot carries a laptop loaded with a tracking system to monitor ship traffic on the river. River pilots also meet with the U.S. Army Corps of Engineers at least once a month to review the agency’s monthly river surveys. They look for areas where sand and silt are building up and areas where maintenance dredging will be done.

Cross-line surveys are lines that run perpendicular to the channel, bank-to-bank and are generally 500 feet apart.

The Portand Tribune has the story of the forgotten River Queen which was a floating restaurant near the Broadway Bridge in the 1970s.

The ‘River Queen’ restaurant ended up as a derelict vessel on the Columbia near Goble and work was started to remove it in June, 2017.

Abandoned and derelict vessels are vessels that are left without authorization on public or private land, or State waters; and/or are sinking, actively polluting. Most of the work to remove and dispose of derelict and abandoned vessels on state-owned aquatic lands is done by private contractors.