Levees are earthen berms that reduce the risk of flooding during high-water events. Crews drill boreholes and remove soil samples to test the condition of the levees.

The railroad embankment that failed to hold back the Vanport Flood is still not up to snuff for flood control nearly 70 years later, reports Steve Law at the Portland Tribune. But local and state officials working on the problem say nearby property owners don’t have the means to cover the estimated $15 million to build a replacement.

Since Katrina the Corps of Engineers has revised standards for flood-control systems. “But only 121 out of 1,451 U.S. flood-control systems have earned ‘acceptable’ ratings so far in the first national inventory—ordered after Hurricane Katrina—and the Columbia River levee isn’t among them,” reports the Tribune. Without levee certification, business owners can’t buy flood insurance.

All Portlanders might help pay to protect the city from Columbia River floods, if lawmakers vote to authorize a new taxing district covering most of Multnomah County, reports Steve Law in a Feb 2019 Tribune article.


Levee Ready Columbia is a partnership of over 20 organizations with communities in Portland, Gresham, Fairview, Troutdale, Interlachen, and Sauvie Island directly benefiting from flood reduction.

The numbered sections show unsafe flood control areas on the levees. The levee system reduces flooding for local residents and protects assets such as the Portland International Airport and the Columbia South Shore Well Field, which provides drinking water for 800,000 Oregonians and is a backup for the Bull Run watershed.

Audubon wants to allow flood waters to spread into Peninsula Drainage District No. 1 , commonly called “Pen 1”, which includes PIR, Heron Lakes Golf Course, and Portland Expo. It would be prohibitively expensive for local governments to condemn and purchase airport properties to provide a larger natural floodplain, reports the Tribune.


A combined sewer overflow is about 80 percent stormwater and 20 percent sanitary sewage. They used to occur much more frequently, but the $1.4 billion Big Pipe project completed in 2011 reduced them by 94 percent to the Willamette River and 99 percent to the Columbia Slough.

Portland’s $1.4 billion Big Pipe Project – the largest public works project in Portland history, included construction of massive underground tunnels on both sides of the river — the Eastside and Westside big pipes — and the Columbia Slough. 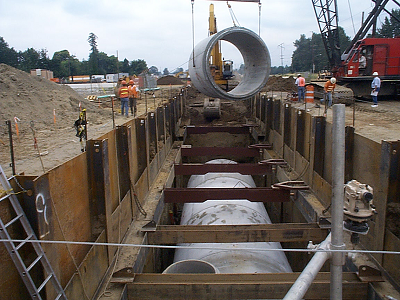 The big pipes channel wastewater to an expanded pump station on Swan Island, which then sends it to the Columbia Boulevard Treatment Plant, with clean water piped into the Columbia River, just beyond the Railroad bridge.

The South Shore Well Field allow Portland to maintain Bull Run as an unfiltered drinking water source and supplies water during emergencies or to augment Bull Run supply in the summer. There are several Groundwater Special Events thoughout the year.