Columbia River Fishing is a big draw for the region. The Vancouver Columbian has daily fish reports.


Salmon fishing on the Columbia starts around May, when salmon typically surge upriver, and over Bonneville Dam. It closes at various times depending conditions and to allow for both sport and commercial fisheries. Oregon and Washington have various fishing zones throughout their states. Below is the Columbia River Zone. 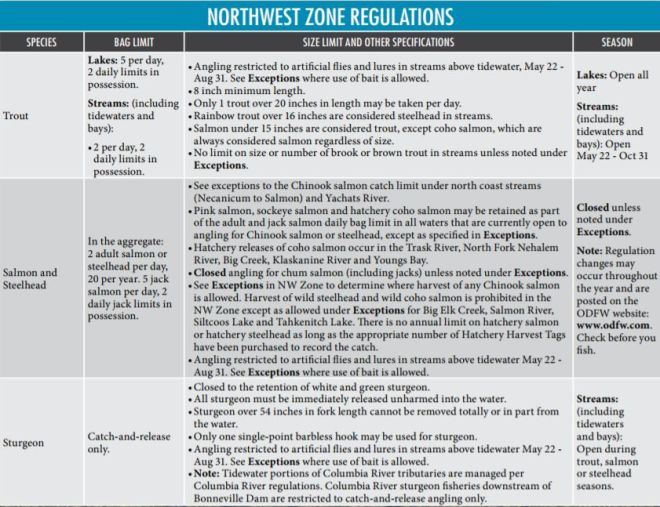 ODFW stocks over 7 million trout each year for anglers to catch. Rainbow trout, the most widely stocked and distributed trout in Oregon, need to be 12″ and are available 365 days a year.


In the spring, anglers may be allowed to keep one fin-clipped spring salmon per day from the river’s mouth to Bonneville Dam. Above the dam, sportfishing has different rules and times. Willamette River anglers will have no restrictions this spring beyond their daily limit of two fin-clipped Chinook. Smelt-dipping was allowed in the Cowlitz River in February and in the Sandy River in March.

Oregon Department of Fish and Wildlife has the latest fish reports. The Columbia River run is one of the only river runs left in the United States. Salmon return in the Spring and Fall after a year or more in the Pacific Ocean.

Tens of thousands of fish have migrated down the Columbia and Snake rivers over the last decade emitting a high-pitched beep every few seconds. Tiny acoustic tags developed by Pacific Northwest National Laboratory have become the go-to technology of the Army Corps of Engineers as it manages its eight dams on the lower Columbia and Snake rivers. It can be injected into the fish, requiring about 20 seconds of handling. The data collected has provided insight into why some fish survive the migration and others do not.

Chinook Salmon are the largest Pacific salmon and return in the Spring. They are prized for their rich flavor. Coho Salmon, also called Silver Salmon, return in the Fall. Sockeye Salmon are often called Blueback. Both have a deep red color.

Sturgeon have a large body with bumpy scales. They are delicious but threatened species so they’re not generally available now. Albacore tuna are caught by hook and line off the Oregon coast.

After decades of closures, the Columbia River spring Chinook run has recently rebounded in an incredible transformation. A change in ocean conditions has been beneficial to fish survival and fin clipping of hatchery stocks allows anglers to identify hatchery-bred salmon, therefore marking them for harvest while troubled wild stocks are returned to the water unharmed.

Columbia River wild spring chinook are protected under the Federal Endangered Species Act, and fishery managers set stringent catch limits on sport, tribal and nontribal commercial catches. The Lower Columbia River up to Bonneville Dam opens March 1 to April 10, 2015. In the fishery, anglers can keep only hatchery-marked spring chinook, which are identified by a clipped adipose fin located on top near the tail. There’s a daily limit of one hatchery-marked Spring chinook for the 2015 season. Barbless hooks are required, and wild unmarked salmon and steelhead must be released.

For fisheries management, the 292-mile stretch of the Columbia River is divided into six zones. Zones 1-5 are between the mouth of the river and Bonneville Dam, a distance of 145 miles. Zone 6 is an exclusive treaty Indian commercial fishing area.


The spring chinook fishery creates a frenzy beginning in February. Fishing in the lower river is often slow in February and March, and then ramps up nearing the closure date. The peak return occurs in April or early May.

Coho adults are typically 3-year-old fish, and return to freshwater after only one year in the ocean. The early-stock coho enter the river from mid-August to early October, peaking in early September.

The annual smelt run once clogged the Cowlitz and Sandy Rivers but the smelt’s threatened status often leave would-be dippers watching seagulls, bald eagles and seals gorge on the oily flesh. With the runs rebounding, ODFW has reopened a limited fishery this year. Limited sport and commercial smelt fishing is expected to return when the Columbia River Compact meets.

The undisputed king of smelt eating was Darwin Weber of Kelso, Washington, who won Kelso’s annual smelt-eating contest each year from 1972 through at least 2003, swallowing some 77 smelt in 30 minutes. His secret: “Eat one more than the guy in second place.”

The contest ended with the decline of the runs, a decline mirrored by the collapse of salmon stocks in general. 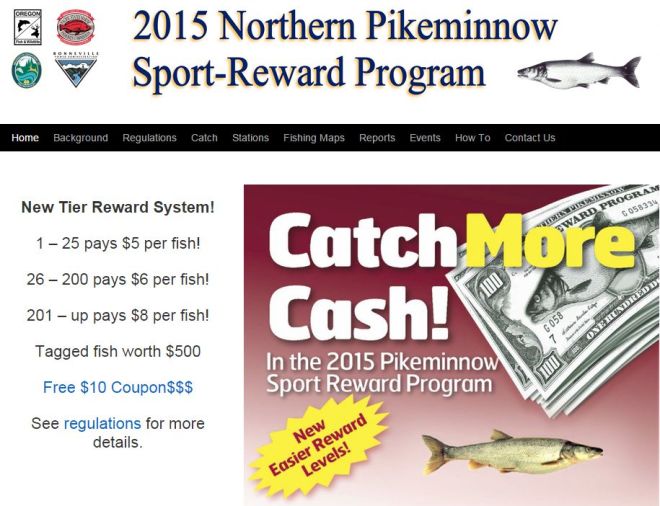 The Northern Pikeminnow Sport Reward Fishery Program on the Columbia River, pays people $5-$8 per fish. The invasive fish are known to eat millions of young salmon and steelhead, and other fish like bass, walleye and shad in the Columbia and Snake rivers each year.

The reward program happens in the summer from May through Sept. 30 for fish measuring 9 inches or longer. The first 100 are worth $5 each with the price per fish topping a $8 each. They have to be turned in daily at one of the dozens of stations along the river, where you are given credit As an added incentive, specially tagged fish are worth $500.

NEXT: Boating
PREVIOUS: Port of Vancouver