The 758,000-square-foot shopping center was built in 1972 and received more than $40 million in renovations between 2010 and 2014. It houses Target, Best Buy, Home Depot, Petco, Ross, T.J. Maxx, Burlington Coat Factory, West Marine, Michaels, a Stanford’s Restaurant and a (soon to be built) Cracker Barrel restaurant, among other businesses.

Many people wondered what would happen to the 1921 C.W. Parker carousel, a signature attraction at the Mall for decades and cherished by many. The carousel was reportedly put into storage (somewhere) on the island after the last remodel by Edens…but its location and condition were a secret.


There was lots of speculation. Perhaps it had been “parted out”? Evidence of the carousel’s existence never turned up. Until now.


The Jantzen Beach Mall has changed hands several times since it opened in 1972 as an indoor mall. In 1995, MBK Northwest acquired Jantzen Beach Center for about $18 million and demolished about two-thirds of the mall in 1995 and 1996, including some 150 small stores to make room for big box development.

In December 1996, MBK Northwest sold the 70-acre center for $76 million to Edens, a Michigan-based pension fund. In April 2012, center managers Edens & Avant Realty announced $50 million in renovations that finished in the summer of 2013 and eliminated the indoor mall for drive-up parking outside of individual stores.


Restore Oregon unveiled three “design concepts” for the Jantzen Beach carousel. According to a news release, these plans, which include a “compact” pavilion, a medium-sized pavilion and a larger pavilion, were created by architecture firms SERA and PLACE, both Portland-based, “to help inspire the creation of an irresistible new attraction for our region.”

“Because the Jantzen Beach Carousel is one of the largest ever built, it won’t fit in an existing building,” Peggy Moretti with Restore Oregon said. “It needs a new pavilion and a new development and that has proven to be something of a challenge.”


“We’ve spoken with OMSI, the Zidell Yards, the Vancouver Waterfront, the Portland Diamond Project has expressed some interest,” Moretti said. But waterfront developments in Portland and Vancouver may have to compete with Kimco Properties elsewhere. Kimco Realty owns interests in 510 U.S. shopping centers across 32 states and owns eight strip mall properties in the metro area, include Clackamas Promenade, Tanasbourne Village, Sunset Mall and Gresham Town Fair.


Moretti said the carousel is in need of some repair, and the organization is working with a conservator to assess how much that will cost. She estimated the full restoration project could cost somewhere around $10 million. Restore has received roughly $300,000 in funds and in-kind service so far toward restoration efforts for the carousel, which was donated to the organization last year from Edens, the former owner of the Jantzen Beach Center, reports the Vancouver Columbian.


The goal is to also make it accessible by public transit, accessible for people of all abilities and accessible to people from all different incomes. Moretti said ideally the carousel will cost around $2.50 to $3 a ride.

The Oregonian has a pictorial history of the Jantzen Beach Amusement Park. 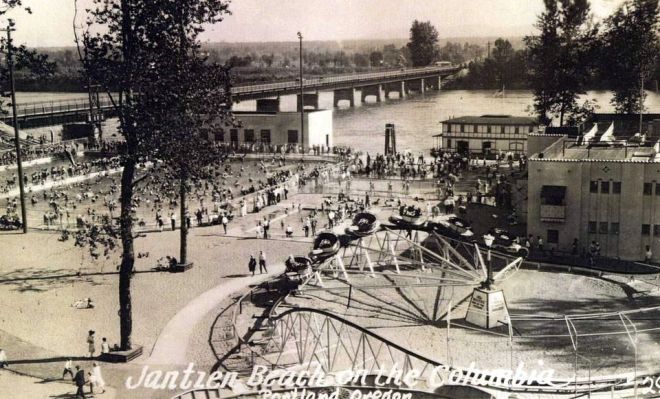 The golden age of the carousel in America was the early 20th century, with large machines and elaborate animals, chariots, and decorations being built. The Jantzen Beach Amusement Park opened on May 26, 1928, promoted as the largest amusement park in the nation. The park sprawled over 123 acres at Hayden Island, notes PdxHistory with the C.W. Parker Carousel and the Big Dipper roller coaster major attractions. 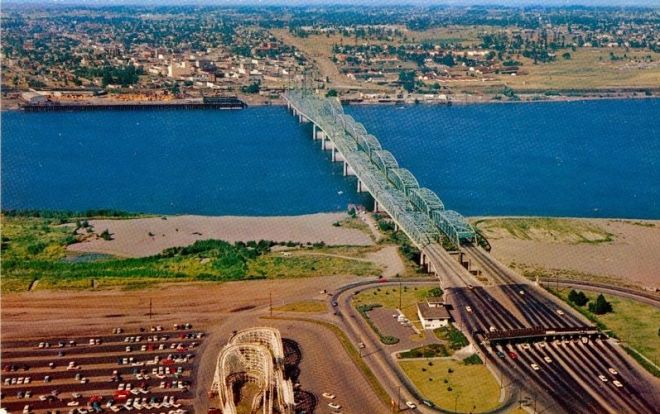 In the 1960s, attendance dipped at the amusement park and it was closed permanently in 1970. The park was razed in 1970 to make room for the new Jantzen Beach Shopping Center, which opened in 1972. The original Jantzen Beach Mall kept only one relic of its former days: its 1921 C.W. Parker carousel.

The Jantzen Beach Carousel has been a fixture of Hayden Island since the opening of Jantzen Beach Amusement Park in 1928. It was built in 1921 by the C.W. Parker Amusement Company, the “American Amusement King”.

C. W. Parker built five large extravagant “park” machines. Only one of those five is still left, the Jantzen Beach Carousel. The 72 horse, four row carousel is said to be lit by 1,350 lights with 286 mirrors. The base is a large 67-foot diameter that can travel up to ten miles an hour on the outside steeds, making it the largest and fastest ride still in operation.

Commissioner Fish asked his office to look into the whereabouts of the merry-go-round, reports the Oregonian in June, 2015. A member of his office called Edens, the South Carolina-based mall owner, and the company told them the carousel was right where it should be: in a camera-monitored, climate-controlled building at the Jantzen Beach shopping center. They were told the carousel is intact.

I previously called the Leavenworth Kansas museum and the volunteer I spoke to said they didn’t have the carousel and had no knowledge where it might be. Restore Oregon has additional details. In 2007 the owners requested that the Jantzen Beach Carousel be de-listed from the National Register of Historic Places. The owners then attempted to have it moved to Portland’s Children’s Museum. However, the funding to move the carousel failed to materialize.

Jantzen Beach Center’s newest remodel altered the mall from an inward facing walking mall to a 100,000-square-foot, U-shaped design where shoppers will enter stores from the outside. The disadvantage of this design is that the Carousel would likely need a dedicated building. Edens may have hard time turning down $3-$4 million for their fully restored and operational 72-horse Parker carousel. Ready to roll.


Starting with the restoration and operation of a 1914 carousel in Portland, Oregon in 1978, they have restored and placed into operation seven antique carousels at various locations around America. Son Brad Perron says they have “the world’s largest collection of antique carousels.”

Here are some images of historic carousels around Portland.

The Albany Historic Carousel & Museum also is a hub of people and expertise.

The Albany Carousel had a 1909 Dentzel Carousel Corporation mechanism donated to their project. Portland Architecture, Friends of Portland’s Wooden Carousels and Save the Jantzen Beach Carousel have more info. 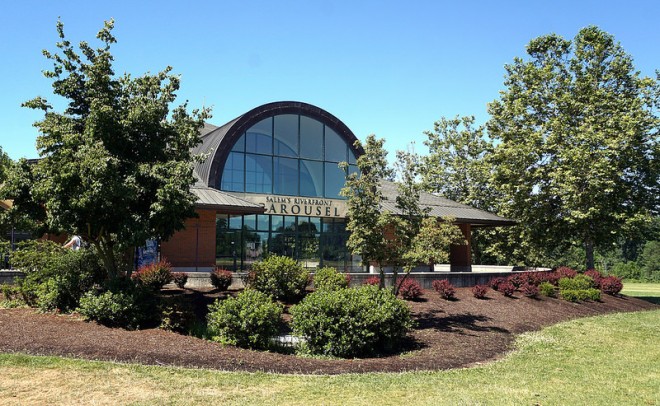 Today, if you want to ride an antique carousel, Salem’s Carousel, lovingly restored by a large group of volunteers, is a great destination.

NEXT: Roller Coaster at Jantzen Beach