The Columbia Corridor is largest economic corridor in Oregon. It stretches 18 miles along the Columbia River from the Rivergate Industrial District on the Willamette River to the Troutdale Industrial District. Their Groundwater Protection Program is designed to prevent hazardous chemicals from contaminating Portland’s well water.


The Estuary Partnership works along the lower 146 miles of the Columbia River from the Bonneville Dam to the Pacific Ocean. The watershed includes 28 cities and 9 counties within the states of Oregon and Washington.

The Lower Columbia Water Trail provides paddlers with information about launch and landing sites, camp sites, lodging and sites of interest along the water. Columbia Connections is their newsletter. The 40-Mile Loop, which passes through Kelly Point Park at the confluence of the Willamette and Columbia rivers, involves 13 local jurisdictions.


Portland plans to spend nearly $5 million in 2017 on the Portland Harbor Superfund cleanup.

The 2,535-page Willamette Superfund plan is a $1.05 billion cleanup plan, projected to be completed in 13 years. It requires landowners to remove more hazardous soil, cap more acres of toxic river bottom shoreline and set aside less land for “monitored natural recovery,” a hands-off approach that lets nature take its course. It was criticized by conservationists, tribes and neighborhood groups.


The most recent Superfund Cleanup Plan nearly doubles the amount of contaminated soil that will be removed from the Willamette and represents a significant cost increase for the 150 entities that will ultimately share responsibility for dirtying the waterway over more than a century.

The Portland Harbor Community Advisory Group is a community of residents and stakeholders who are monitoring the cleanup of the Willamette River.


Metro works with communities, businesses and residents in Clackamas, Multnomah, and Washington counties. The agency’s boundary encompasses Portland, Oregon and 24 other cities – from the Columbia River in the north to the bend of the Willamette River near Wilsonville, and from the foothills of the Coast Range near Forest Grove to the banks of the Sandy River at Troutdale. Metro offers many field trips and nature programs (calendar). The West Columbia Gorge Chamber of Commerce includes Mt. Hood and Columbia River Gorge.


Among the environmental concerns are several Coal, Oil, and Gas terminals planned along the Columbia River.

The Cherry Point Washington coal export terminal, in Puget Sound, would be the country’s largest, able to export as many as 48 million metric tons of coal yearly to Asia. The Longview coal export facility runs a close 2nd, planned to export about 44 million tons/year. 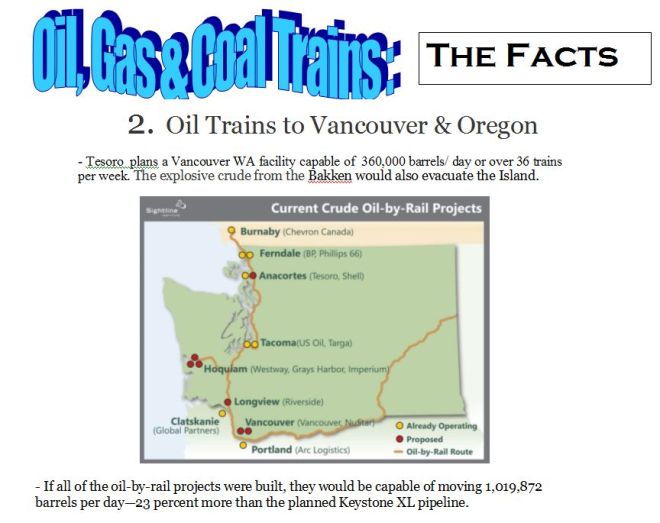