The Columbia River Gorge is up to 4,000 feet deep and stretches 80 miles from Troutdale through the Cascade Range to The Dalles, Oregon.

The Columbia River Gorge began forming as far back as the Miocene (roughly 17 to 12 million years ago), and continued to take shape through the Pleistocene (2 million to 700,000 years ago), forming a huge basalt plain.

The Washington Geological Survey has created a breathtaking journey through the ice-age floods that shaped the landscape of Montana, Idaho, Oregon, and Washington.


But the Columbia River Gorge wasn’t created by volcanic flows or giant floods. The river was here before the mountains. The river cut a path as the land was gradually pushed up by tectonic forces.

As recently as 165 million years ago, most of western North America was still part of the Pacific Ocean. The Yellowstone hotspot passed through the Snake River Plain about 10 million years ago.

Smith Rock is a remnant of a huge “super-volcano“, some 40 miles in diameter that erupted in Central Oregon 29 million years ago. A large caldera was formed when overlying rock collapsed into an underground lava chamber.


The Bonneville Floods rushed down the Snake River, while the Missoula Floods occurred in the same period, but farther north.

Hells Canyon on the border of Oregon and Idaho is the deepest river gorge in North America, 2,000 feet deeper than the Grand Canyon.

The waters of the Snake River began carving Hells Canyon out of the plateau about 6 million years ago and now flows more than 1 mile (1.6 km) below the canyon’s west rim on the Oregon side.

You can easily see layers of volcanic flows (pdf), topped by layers of flood sediments all along The Gorge. The floods came after the volcanic basalt was deposited…and did their share of remodeling.

During a 10–15 million-year period, lava flow after lava flow poured out, eventually reaching a thickness of more than 5,900 ft. The 1980 Mount St. Helens eruption had a Volcanic Explosivity Index of 5, with 0.29 cubic miles of volume ejected. Crater Lake was formed after a VEI of 7, with 62 cubic miles of ejecta.

The basalt cooled, creating hexagonal shapes as it shrunk. As the molten rock came to the surface, the Earth’s crust gradually sank into the space left by the rising lava. The Cascade Mountain range was pushed up later as the river carved a path through the rock over millions of years.

The Missoula Floods were a series of cataclysmic floods that swept periodically across eastern Washington and down the Columbia River Gorge at the end of the last ice age, between 15,000 and 13,000 years ago.

The ice sheet retreated 15,000 years ago causing enormous ice dams to break, around the time humans first appeared in the area in the current Holocene era.

The water and ice carried giant boulders called “erratics” and deposited them all over Portland and the Willamette Valley.


Lake Missoula, a prehistoric lake in western Montana, existed periodically at the end of the last ice age and contained about 500 cu miles of water, half the volume of Lake Michigan. 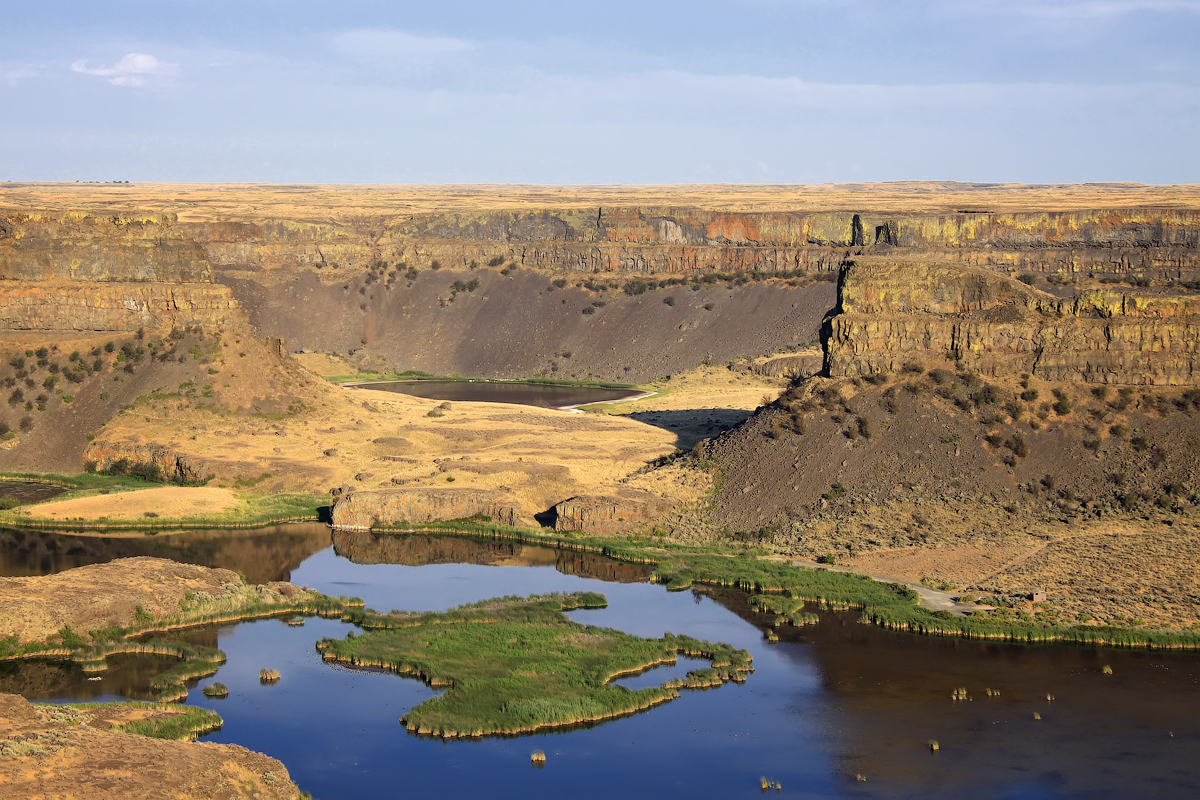 The periodic rupturing of the ice dam resulted in the Missoula Floods – cataclysmic floods that swept across eastern Washington and down the Columbia River Gorge approximately 40 times during a 2,000 year period.

The flood started in the Idaho panhandle as a wall of water 2,000 feet high, bursting through the remnants of a glacial dam at 65 miles an hour. In volume, the deluge thundering across the Pacific Northwest was 10 times the combined flow today of all the rivers on Earth.


After a week or two, the flood subsided to normal river levels, the land around stripped bare. Halting recovery began in the ensuing years, vegetation getting a toehold on ravaged floodplains. Then, 30 to 50 years later, another flood would come.

This cataclysm happened as many as 100 times over the next 3,000 years, and helped shape the canyon we see today. Coulees are gouged-out canyons in the high desert of central Washington that now carry little or no flowing water. The two most spectacular are Moses Coulee and Grand Coulee.

Dry Falls, on the Upper Grand Coulee, channeled water at 65 miles per hour over its 400-foot rock face. It is estimated that the falls were five times the width of Niagara with ten times the flow of all the current rivers in the world combined.

In 2016, the Columbia River Highway turned 100 years old, the blink of an eye in geologic time. Today a journey through the Gorge remains breathtaking. The history is there for all to see. Vistas from 100 years ago are largely intact and the geologic history from 10,000 years ago and 10 million years ago remain.

The Columbian mammoth (Mammuthus columbi) was one of the last in a line of mammoth species, beginning in the early Pliocene from 5.3 million to 2.58 million years ago. The closest extant relative of the Columbian and other mammoths is the Asian elephant.

For a few thousand years prior to their extinction, Columbian mammoths coexisted in North America with Paleoamericans – the first humans to inhabit the Americas. Columbian mammoths were bigger than Wooly mammoths and probably had short, bristly hair more like a modern elephant. They stood about 13 feet tall and grew enormous spiraling tusks.

Hair thought to be that of the Columbian mammoth has been discovered in Bechan Cave in Utah (above). Radiocarbon dating showed that mammoths may have survived on the Colorado Plateau until about 11,000 BP (Before Present). A Columbian mammoth tusk was discovered near Ridgefield a few years ago. The Discovery Center in The Dalles features a life-size 13-foot Columbian mammoth.


Let’s bring Mammoths and the Missoula Floods back home. In VR.

Hayden Island already hosts hundreds of tourists every week on Stern Wheelers. Soon we’ll have thousands of additional tourists with the opening of Waterfront Vancouver.

Give them an experience. Google’s Arts & Culture hopes to bring cultural institutions to those unable to visit in person.

Rosetta Stone by The British Museum on Sketchfab